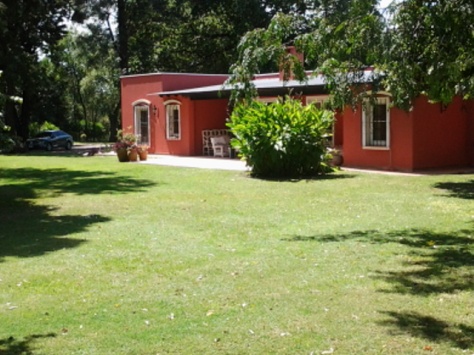 It’s been a month since we came back to Buenos Aires and, both unable to bear the thought of living in the madness of a crowded city,  we opted to return to WOOFING in the suburbs. We had already made some enquiries about a polo farm near Los Cardales (the thistles) and we decided to follow this up, eventually getting a response from the mother of the owner saying that there was an opportunity and we should head over.
It was a 45 minute bus ride from Plaza Italia to Pilar, the closest big town. From there Annabel, the star polo player (ranking 6th in the UK) picked us and our rucksacs up in her monster truck. It was 30 minutes drive in the monster truck, the final leg of the journey being on a dirt road.  And there we were transported back in time to an authentic estancia/hotel, complete with tennis courts, swimming pool, TV room and games room! Only snag was a lack of organic vegetables.  This WOOFING experience was going to be different, Jennifer, the owners mum explained that the problem with the WOOFING was lack of continuity and that, due to the weather, the garden was either overgrown or dried and dead before the next set of WOOFERS came through. So instead of WOOFING would we prefer to be in the hotel trade.
To start with maintenance, and painting furniture were the main duties, we were not keen on cooking for guests or cleaning rooms, however, Jennifer enticed us into the kitchen with some tasty morsels and showed us how to cook some of the standard fair that the guests would like. Interestingly most guests here are weekenders from BA and surprisingly do not have very sophisticated palettes and certainly dont like spicy food.  It didn’t take long and soon there were three of us in the kitchen busily creating all sorts of food and amazingly we were enjoying the compliments from the guests not to mention the freedom to create whatever sweet delights we wanted to. Soon Rachael was helping Norma, the horse trainers wife, change the rooms over and we had moved fully into the catering business.
The hours started to get a bit long and there have been moments were we have wondered why we gave up well paid jobs to cook and clean for food and lodging, but then the sun shines, we get our days off and swim in the pool or play tennis and then it’s obvious.

As well as all the sporting activities we are foster parents to a pack of dogs; Rubia (pictured below, yes that is a dog!), La Lula, Scooby, Rambo, Osito (the big smelly bear) and Delphina.
As you can see from the photo, these are pretty wild vicious animals and so I’ve made doggy treats and trying my hand at dog training,  however it is pretty hopeless trying to train the whole pack at the same time and a couple of times the training session has turned into a feeding frenzy and fingers appeared to be part of the menu!

Anyway somehow a month has passed us by, Jennifer went back to England and Annabel went to do some charity/promtional work in Salta, we had the place to ourselves over the weekend, although there were also eight guests to attend to, check out the reviews…

Anyway will leave you with a view of the pool. 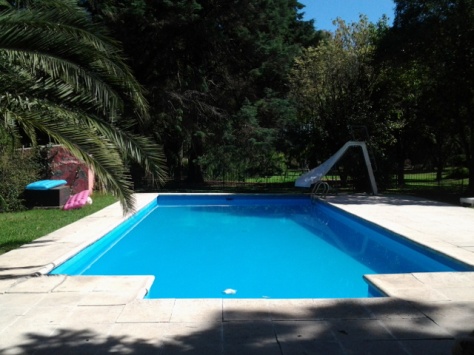 3 thoughts on “Life in the hotel business”

A year in the life of a Porteno